Yeti Coolers, a go-to for sportsmen around the country, is cutting ties with the NRA Foundation without explanation or prior notice.

The NRA Foundation is a charitable organization.

The separation comes although Yeti products have long been a staple at Friends of NRA Foundation Banquets and functions.

NRA-ILA quoted NRA past president and USF executive director Marion Hammer saying, “Suddenly, without prior notice, YETI has declined to do business with The NRA Foundation saying they no longer wish to be an NRA vendor, and refused to say why.  They will only say they will no longer sell products to The NRA Foundation.”

Hammer pointed out that the NRA Foundation raises money “to support youth programs and educational programs nationwide” and says Yeti “should be ashamed.”
We are all sportsmen and women here, right? So let’s talk about finding some alternatives to YETI. 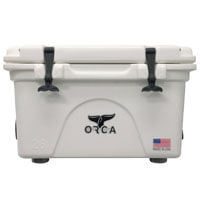 Orca Coolers are one of those brands that don’t necessarily market themselves as being cheaper than YETI’s. However, tons of people have said that strictly in terms of quality and performance, they’re actually better. One of the huge draws of Orca coolers is that, unlike YETI, all of them are made in the USA. This is actually an aspect that’s caused YETI to lose a lot of their loyal customers; even after outsourcing most of their manufacturing to the Philippines and China, they continue to charge top dollar. 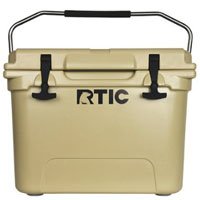 RTIC Coolers, available in various sizes right here, has without a doubt been YETI’s biggest rival in terms of lost sales. In fact, ever since they began manufacturing back in 2015, the brand has been full-throttle as far as their advertising and marketing campaigns, never afraid to shy away from calling out YETI directly.

Their company slogan? “Half the price … Holds more ice.”

They’re definitely spot on with the ‘half the price’ part; it’s clear their sole intention from the beginning was to offer very similar style coolers as the YETI, at a 50% price cut. And they’ve been extremely successful in doing so – they’ve catered to the massive crowd that would love to have a really nice quality outdoor cooler, but find it ridiculous to pay YETI’s prices.

However, recently it seems that RTIC’s bold advertising has caught up with them in terms of legal disputes; they’ve been in and out of court with YETI basically ever since they began marketing, and earlier this year they finally decided to settle the lawsuit and pay YETI a big chunk of money, as well as discontinue production of their earlier models.

This doesn’t mean they’re out of business, though; they’ll still be manufacturing and selling coolers at half the price as YETI, they’ll just be changing up their original design a little bit.

So, if you want to grab one of these new RTIC coolers by their summer drop date, we highly recommend you pick one up asap – they’ll likely get sold out almost as soon as they hit the market. 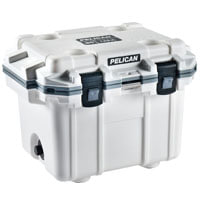 Pelican Elite Cooler is another one of those brands that’s not necessarily cheaper than YETI, but instead has tried to construct a product that’s even superior.

In fact, Pelican has earned the reputation among many hardcore outdoors people as being the best-performing and most durable cooler on the planet, period. In terms of ice retention it is actually pretty well-known that Pelican’s gasket design is superior to YETI’s, and they will hold ice longer under the same conditions.

If you’re not specifically looking for coolers cheaper than YETI, and are more concerned with performance instead, you might really want to check out Pelican’s lineup. 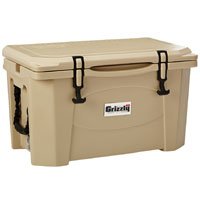 Grizzly Cooler is another brand that’s survived basically by offering coolers that are cheaper than YETI. They’ve actually been around for much longer than their rivals (since 1983, in fact), but their popularity never really took off until the massive YETI craze settled in.

Grizzly actually has got one of the most loyal followings of outdoorsmen and women anywhere; their major claim to fame is that their ice chests are 100% indestructible, and they come with a lifetime guarantee — all while being substantially cheaper than the top competition.

Another good thing about Grizzly is that they have plenty of size options to choose from, giving them a more complete rivalry to YETI’s Tundra series than, say, ORCA’s lineup. 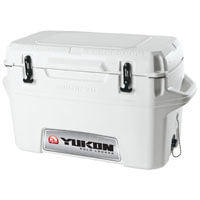 Strictly in terms of price, RTIC coolers and the Igloo Yukon Cold Locker are going to be the cheapest options when it comes to an ice chest that’s comparable in quality to the YETI.

The good thing about the Cold Locker is that they come in much larger sizes than the RTIC; if you’re wanting a value version of one of the big YETI Tundras, these are the best choice. And in terms of performance, they have not disappointed; a lot of customers have claimed that they easily retain ice for multi-day hunting and fishing trips, and are just as durable as their YETI counterparts.

Granted, you’re not going to get the ‘status symbol’ that comes along with owning a YETI, but for the thousands of people who are concerned more with cost and performance than brand name, the Yukon Cold Locker is a good option.

All in all, these YETI coolers are just as good as the original, and may be easier on your wallet.